I ended my Route 66 journey at Flagstaff. I very much intend to return to Route 66. Living in California makes it convenient for me to explore the part of it I missed on this trip (Flagstaff to Santa Monica). I’m looking forward to crossing the Mojave Desert and exploring the Los Angeles alignments, something I never did in all my years in L.A.

As planned, I spent July 4th touring Monument Valley. This concentration of tall sandstone mesas and buttes has provided defining images of the Great American West in many movies and photographs over the years. It is a few hours away from Flagstaff and Route 66, so it was never a Route 66 attraction.

Monument Valley is in Utah and in Navajo Nation, a semi-autonomous Native American territory. The Navajos manage Monument Valley. The two good ways to see Monument Valley are from the top of a lookout hill (which houses a very new hotel), and from the ground, driving the 17-mile track through the valley floor, an extremely rough ride. I liked the first view better. On the drive, however, I came to a high point with a panoramic view of the valley, which I was able to capture by stitching together a number of photographs:

This landscape has been used in many John Ford westerns, as well as newer movies like Windtalkers. (Incidentally, this movie is about the Navajo code talkers of WWII. The Allied forces were looking for a good code for their secret transmissions, and hit upon the idea of using Navajo Indians to make these transmissions in their native tongue, which was understood by only a handful of people outside the tribe.) As I drove through it, I imagined the time when white settlers and Native Americans were warring over this land.

Here is a picture from the lookout hill. (My camera is not capable of taking good landscape pictures in bright sun, so I enhanced this picture and the one above.) 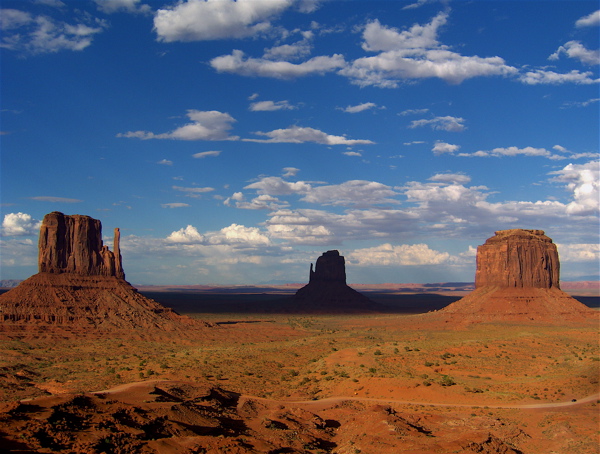 I spent the day in Monument Valley and left before sunset. Sunset would have been a good time to view Monument Valley, but I was too tired after driving in the sun for hours on that cratered road. I stayed the night at Kayenta, Arizona, a small town nearby. Kayenta is officially on the Indian reservation, and I couldn’t get any beer at dinner, because alcohol is not allowed on the reservation. This was my first time in an Indian reservation. I wasn’t fully aware of the semi-autonomous operation of Indian land, and am curious about how the state, federal and native American authorities share control and jurisdiction in this enclave.

I had planned to go out at night in the Monument Valley area to do some stargazing, and was greatly looking forward to it. However, I couldn’t, because it rained heavily that night. I overheard at dinner that the people who stayed at Monument Valley till sunset got a double treat: sunset views as well as panoramic views of dramatic lightning from the storm clouds.

July 5th was my last day of this trip. I had no plans for this day, and decided to backtrack on my path to go back and check out Meteor Crater east of Flagstaff, something that I had hoped to see while driving Route 66. It’s a short distance from Flagstaff, and worth the drive. Here’s a picture of it (also enhanced): 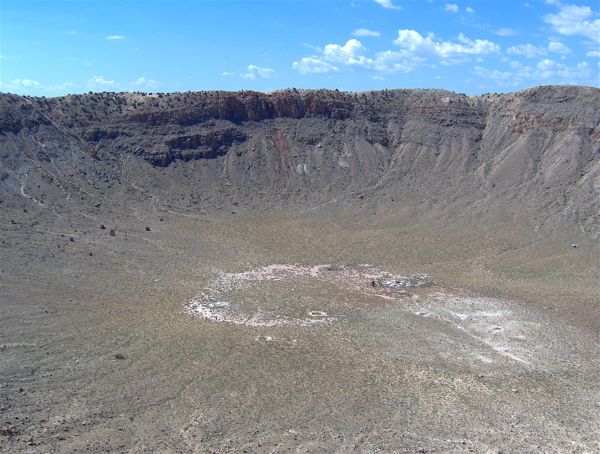 This is the impact crater from a meteor that collided with the earth about 50,000 years ago. The meteor lost only a negligible amount of its mass and velocity in traveling through the 100 miles of the earth’s atmosphere. The crater sits in a large flat area of complete emptiness clearly visible for miles in all direction from the high observation deck on its rim.

On my way back to Flagstaff airport for my flight to San Jose, I made a stop at another crater, of a very different kind. Sunset Crater was formed about 900 years ago from a volcanic explosion. The lava flows from that eruption destroyed all life for miles around, and the area is slowly re-vegetating. The crater used to be open to hikers till the 1970s, but is now closed to give plants a chance to grow on its slopes. This picture shows the hill of the volcano, with the remnants of the lava flows in the foreground, by the side of the walking path.

Both Meteor Crater and Sunset Crater used to be side-trips for Route 66 travelers.

I finally gave up my rental car at Flagstaff airport after eight days, 2464.4 miles of driving, one nasty scratch I put on it while backing up, and one speeding ticket that I finally got on my last day. To round things out, on the way back to San Jose, my bag didn’t make the connection that I made at Los Angeles, and it arrived home one day after I did.

It was a great trip, very absorbing and immersive. This trip really has done what travel is reputed to do—broaden the mind. I hope to write my Route 66 retrospective the first chance I get.