I entered Arizona today, and ended my Route 66 journey at Flagstaff. Route 66 goes on, of course, all the way to Santa Monica.

I started my morning by resuming my poking around in Albuquerque. The old Route 66 still forms the main drag through town, Central Avenue. At 18 miles, Central is the country’s longest main street. I headed west on Central from my hotel, approaching downtown, and soon hit a row of vintage motel neon signs that I spent quite some time chasing down and photographing. I ran into a couple from Canada who were making the same stops as me to take pictures of the same signs. They had been driving from Chicago over the last week as well. We discovered we’d made some common stops, and talked about the crowd and street closures at the Chicago end. Here’s some of the classic motel neon that was so fascinating to both me and them: 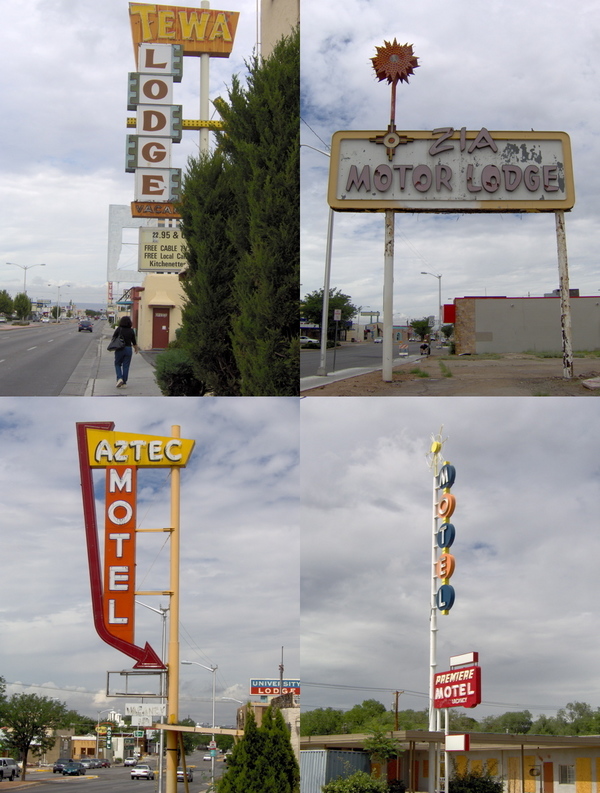 The names of motels in Albuquerque had a strong Central American flavor. I don’t think I saw this in any other town, even in New Mexico. But all of New Mexico does have a Native American flavor. The state is dotted with “trading posts” where Native American artifacts are sold. These probably started life as real trading posts facilitating commerce between two communities with different currencies (the dollar versus whatever was of use to the Indians). Opposite the KiMo theater in downtown Albuquerque is a wholesaler of Indian handicrafts called Skip Maisel’s. This store has a monstrously large collection, which one can spend hours browsing through: 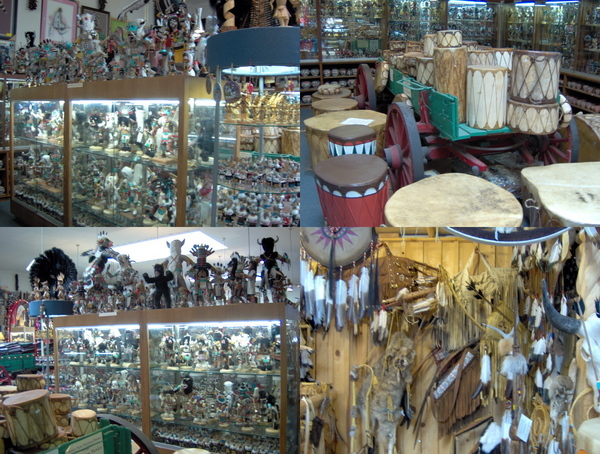 I was very interested in the drums and bows-and-arrows, but I didn’t buy either. As my flagship souvenir of the trip, I bought a traditionally bedecked Navajo battle club, with a flat stone head and a wooden handle decorated with feathers and horse hair: 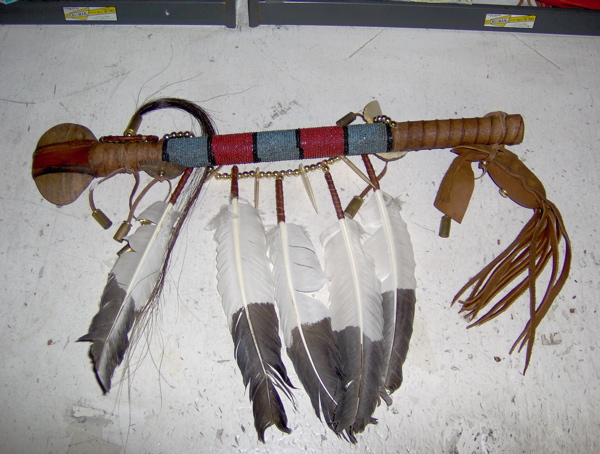 The pueblo style of architecture, mirroring the style of construction used by ancient Indians here, is used liberally in Albuquerque, both by old and new constructions. Here are the Journalism Building at the University of New Mexico, and a nondescript residential building in a side street: 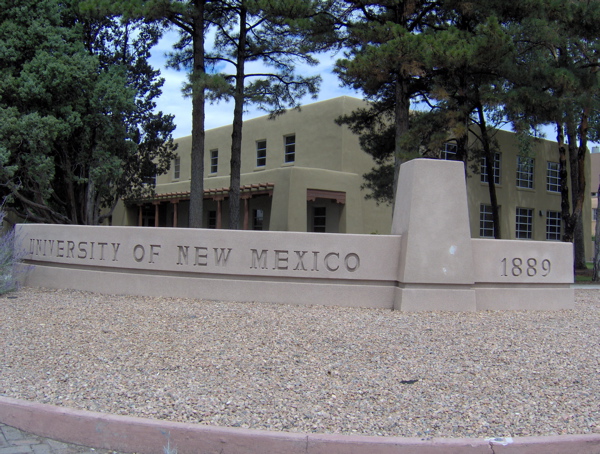 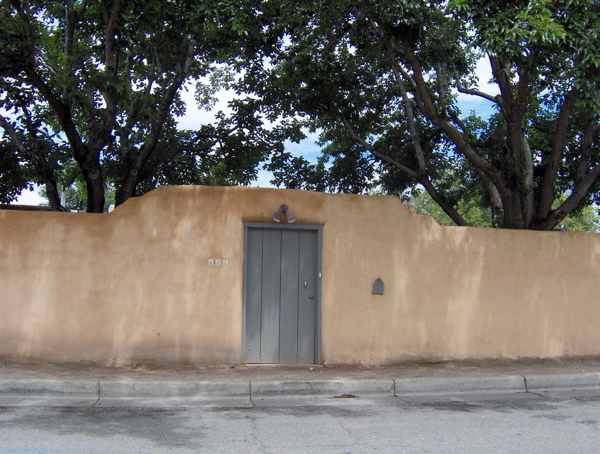 On my way out of the city, I crossed the Rio Grande river, which was not as impressive as it sounds. There were a few more vintage motel signs on this side of downtown, the most evocative of which was for the Westward Ho! motel, with its exotic saguaro cactus and enthusiastic name capturing the spirit of exploration that got people driving for pleasure on Route 66: 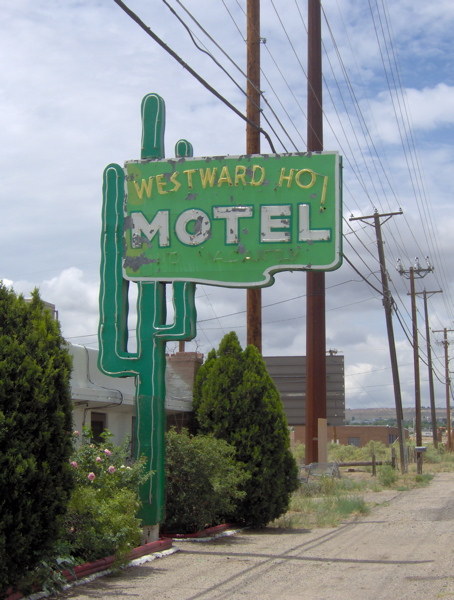 After leaving the city, I followed Route 66 through the towns of Mesita, Laguna, New Laguna, Paraje, Cubero and San Fidel. Also, in the midst of these was the highly incongruously named Budvile. The road snaked through quiet places where you could pull over by the side of the road, listen to the birds and insects, and admire the rocks of New Mexico: 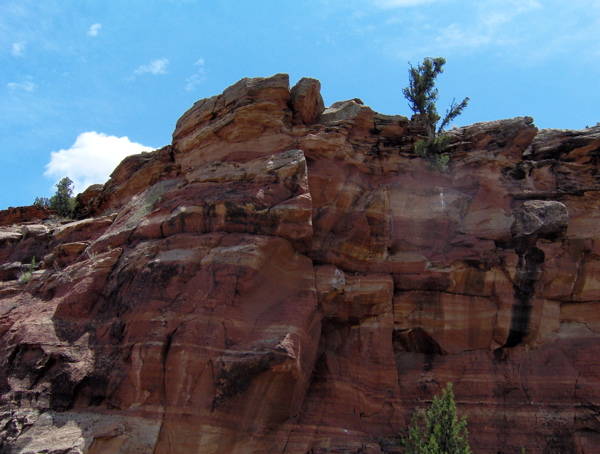 The next two towns were McCartys and Grants. Between these two, the road was lined with black lava beds. Apparently, there were eruptions in this area up until a few hundred years ago. 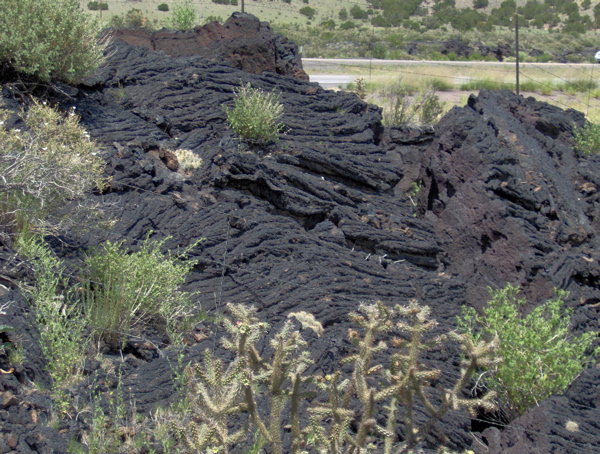 At Grants I came across some interesting motel neon, as well as neon for this interestingly named cafe (named so because Grants was the site of uranium mining after the element was discovered there in the 50s.) 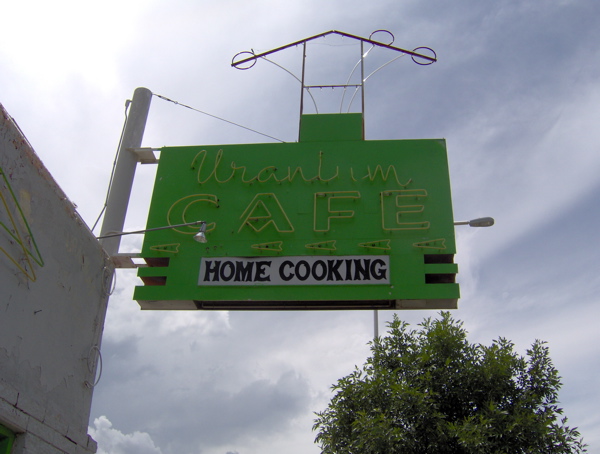 At this time it was quite late in the afternoon, and I needed to reach Flagstaff, Arizona by nightfall, as my Route 66 trip was drawing to a close. I took the freeway to Gallup, with the intention of following Route 66 from Gallup into Arizona. This was a wonderful drive. A long Santa Fe Railroads train pulled its mile-long load of shipping containers alongside the freeway while the sun and rainclouds quilted the sky above. Lightning arced between low, dark clouds and the ground in the distance while I drove under sunny sky, revealing just how much of the entire horizon one can see in such open country.

At some point, I crossed the Continental Divide, the separator for the direction of flow of rainwater in the continent. When I got to Gallup and prepared to rejoin Route 66 into Arizona, I noticed that Route 66 in Arizona overlaps with the freeway almost entirely until Flagstaff. So I stuck with the freeway, entering Arizona. Very soon, the rock formations became more striking and varied in shape and color.

My first stop in Arizona was Petrified Forest National Park. The old Route 66 used to run right through this park, and there is now a memorial to that path in the park. The petrified trees of this park were a celebrated attraction for Route 66 travelers. These fossils are indeed amazing; whole trees turned into solid rock by the deposition of minerals within them.

After I exited this park, it was too late to see Meteor Crater, and I decided to make only a couple more quick stops before speeding to Flagstaff. At this point, I had navigated the esoteric twists and turns of Route 66 with sundry maps and guidebooks in hand for almost a week. I had experienced tangibly what Route 66 travel meant, and how it differs from travel today. I had acquired some skill in following the tangled web of alignments that are collectively called Route 66. I felt a sense of parting at leaving behind Route 66. For my final Route 66 stops, at Holbrook and Joseph City, I needed one last reference to set me on my path, and this came in the form of one of the familiar brown “Historic Route 66” signs I had been following through seven states. These signs are infrequently placed, but when they are, their presence is very reassuring to an unsure traveler. I decided to stop and take a picture of this last sign that I needed guidance from on this journey.

My last two stops were the Wigwam Motel and the Jackrabbit Trading Post, both of them Route 66 classics that are now part of Route 66 lore. The Wigwam Motel used to house its guests in cabins shaped like teepees. Today it has been preserved complete with classic cars of the 50s and 60s parked outside the cabins: 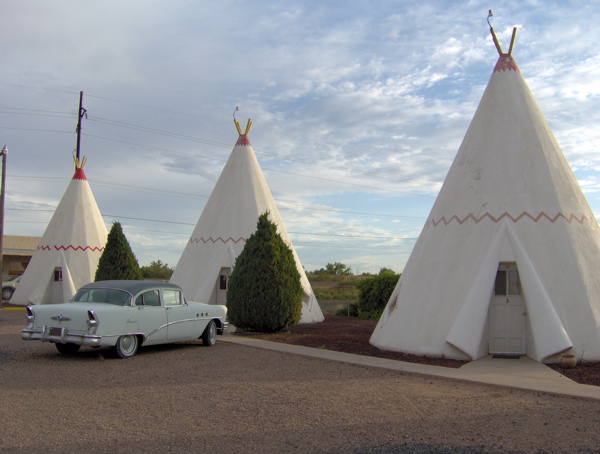 In this town, Holbrook, I also checked out the Rainbow Rock Shop, with dinosaur sculptures aplenty adorning its front. Route 66 used to be dotted with giant sculptures of various creatures, such as these dinosaurs (and many others like it), and the Gemini Giant and Blue Whale that I posted pictures of earlier. These giants used to be an entertaining part of the Route 66 flavor.

My final stop before Flagstaff was the Jackrabbit Trading Post. Its mascot, the jackrabbit (and its logo, “Here it is”) used to be emblazoned on billboards all over Route 66, and became an instantly recognizable icon among travelers. This reminds me of the Meramec Caverns barnside advertisements and the Fat Man logo that I spoke of earlier. 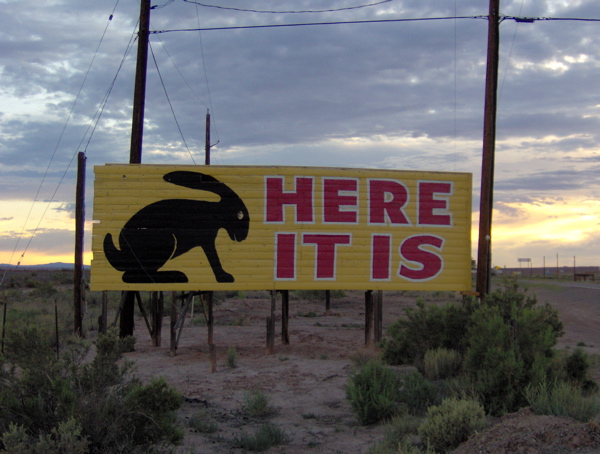 After this I headed off to Flagstaff, where I had a hotel room waiting for me, the first one I had reserved in advance, on account of this being the Fourth of July weekend. I reflected back on the beginning on my trip in crowded, humid Chicago, and my first, nervous, rainy night of hunting for a hotel room in Wilmington and Joliet. I have gathered a few observations and insights from this trip, which I will put down after I return from Monument Valley tomorrow night.