I didn’t think I would still be deep in the interior of New Mexico today, but I am. I took it easy today, spending a fair amount of time poking around in towns. New Mexico’s dominant flavors are the desert landscape, the Native American presence in design themes and local business, and, along Route 66, the sudden explosion in vintage neon signs and motels compared to the previous states on the route. In those states, Route 66 seemed predominantly a 30s and 40s road; in New Mexico, it has a decidedly 50s and 60s feel. I didn’t find any vintage pavement on any of the alignments I drove on in New Mexico. I didn’t find the road snaking through well-shaded farming communities.

You should know that this motel is right on Route 66, meaning its driveway is on Route 66 itself. This differs, of course, from today’s model of placement of businesses alongside highways—the highway has well-defined entrances and exits, and businesses are not located by the side of the freeway, but on surface streets accessible from the freeway via exits. If you can picture the difference, you can picture one of the most important aspects of Route 66 history—everything was on the highway itself, no exits, no side streets to go into. You could cruise down Route 66 and pull into any motel at a moment’s notice. Route 66 was America’s Main Street. Here are some of the choices that would have greeted you as you drove in Tucumcari: 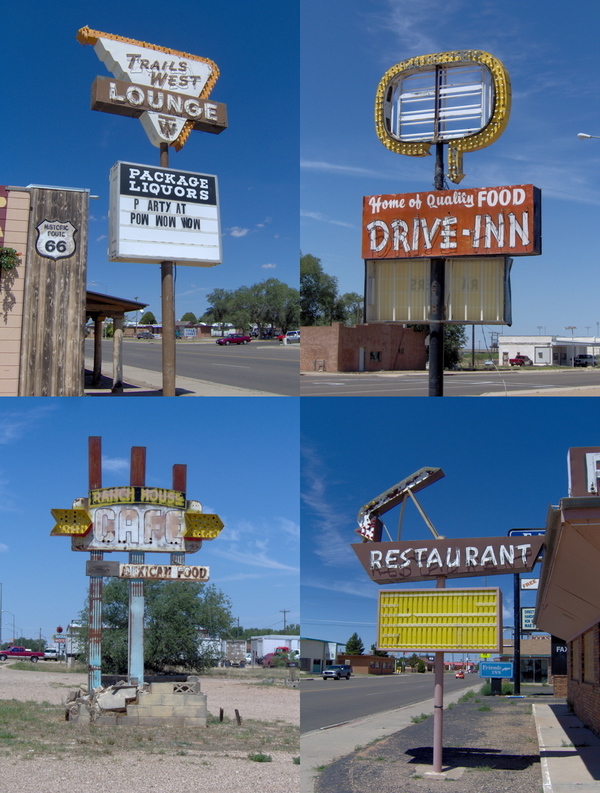 Curious shapes would attempt to attract your attention: 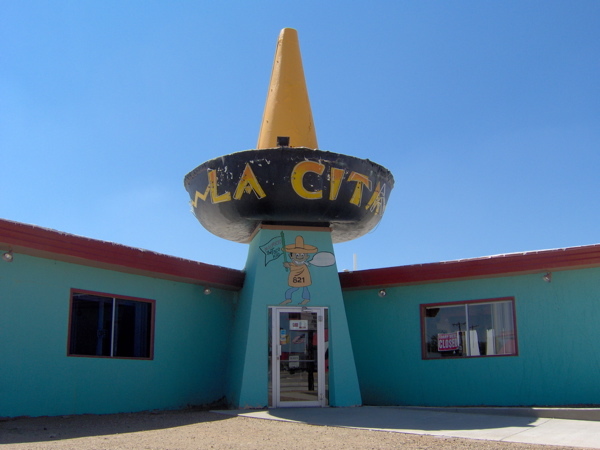 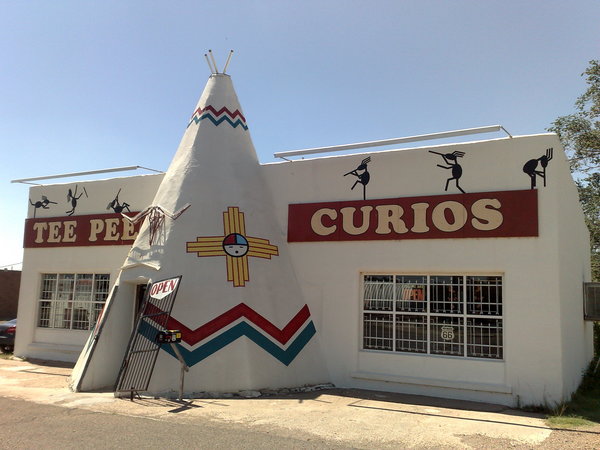 The second picture is of Teepee Curios, an old Route 66 stalwart that is still in business. Here I bought a mysterious sculpture of some exceedingly ugly deity. My theory is that it’s carved out of solidified dung. The store owner doesn’t know anything about them; they were part of a 30-year old cache of curios he bought off someone else. This store lives and breathes Route 66.

Finally, I headed out westward on Route 66 from Tucumcari. I passed through a set of non-towns—Palomas, Montoya, Newkirk, Cuervo—before reaching Santa Rosa. This land is flat, dry, rocky and unending as far as the eye can see. At one turn in the lonely road, I scattered a flock of five or six vultures that were feeding on some dead animal. Upon closer inspection, it turned out to be a deer. I found it symbolic that yesterday a live and very energetic deer had been scampering in my path in a woody stretch of the route, and today a dead one lay baking and rotting under the hot desert sun. I am driving into the desert.

A freight train with something like a hundred carriages drifted past me on the tracks that accompany the road: 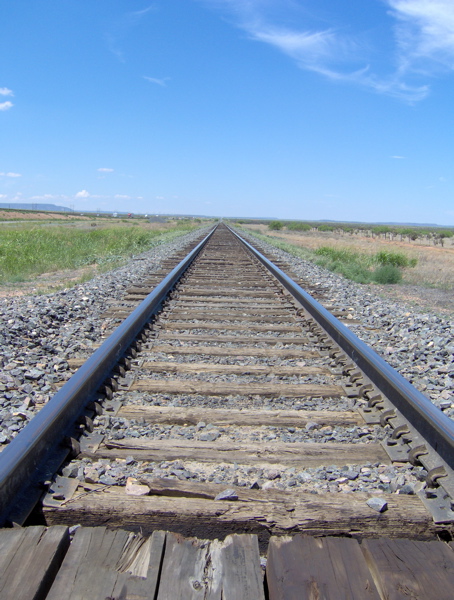 At Santa Rosa, I ate at Joseph’s, which has adopted a famous Route 66 logo—a satisfied-looking “fat man”—that was left homeless after its famous owner, the Club Cafe, folded. 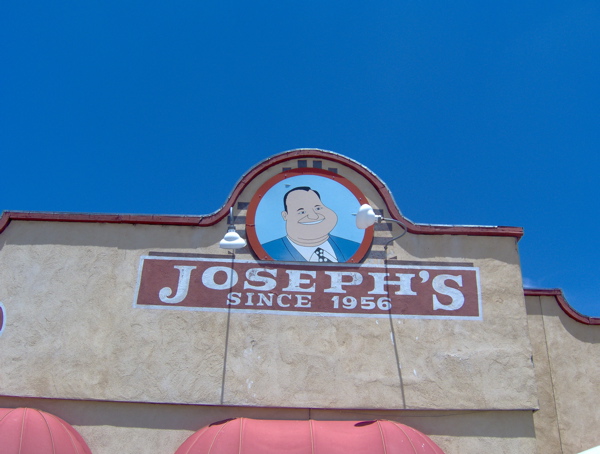 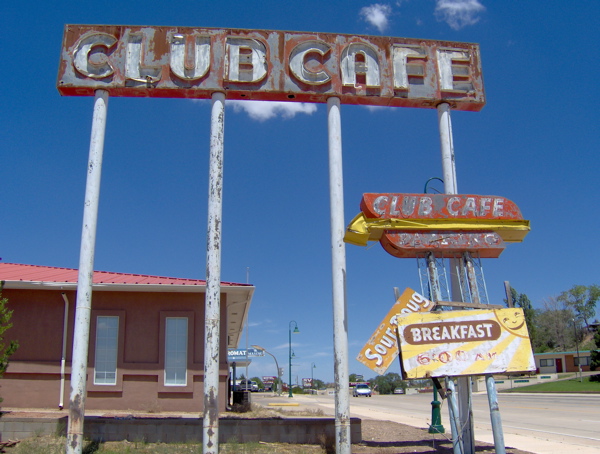 In Santa Rosa, I came across some more classic neon and vintage motel designs. As you can tell, design themes and Americana from the middle of the century really get me excited.

After lunch, I took Route 66 again to the big city of Albuquerque, New Mexico. I gained altitude, and mountains loomed all around me. I drove through a mountain pass. In centuries past, trails for people and cattle cut across the plains of the West and sought passage through the mountains. These trails are now the routes of roads and highways. I have been driving on and across some old, old cattle trails in my journeys on Route 66. The old trails used to have markers placed to help guide people along them. While driving through the mountain pass, I came across the site of such an ancient trail marker: 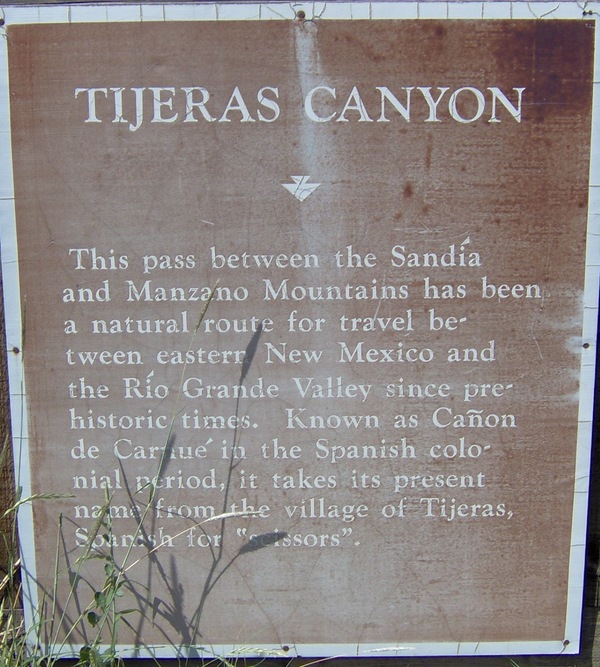 Near this sign I also found a non-trivial snake on the side of the road. Snakes, armadillos, jackrabbits and large lizards are the iconic species represented in the lore of Route 66 in this part of the country.

Soon I descended from the Sandia-Manzano mountain pass into the Rio Grande Valley and reached Albuquerque. I intended to spend some time here and then move on, but when I opened my guide book, I realized there was enough here to keep me busy for a while, so I checked into a motel for the night.

Outside of Albuquerque is the Petroglyph National Monument, the site of thousands of etchings on rock surfaces. Most of this rock art is believed to have been created by the ancestors of today’s Pueblo Indians between circa 1300 and circa 1680. Some others are believed to have been carved as early as 2000 B.C. I took the short drive and hike to see them. I saw but a handful out of the thousands scattered throughout the park:

Returning to Albuquerque, I checked out the center of town, with the old Route 66 running straight through it and businesses on either side. Unlike the many, many smaller Route 66 towns I saw that had become virtual ghost towns after the death of Route 66 choked off the traffic, bigger Route 66 towns that had other aspects to their economy sustained their Route 66 business centers. Albuquerque is one such city. I enjoyed the unique visual character of this city, strongly reflecting the unique cultural mix of Native American, Hispanic and Anglo here. I checked out the famous architecture of the KiMo Theatre, done in a style that combines themes from these three cultures. I surveyed some more vintage motels and their neon signs, before setting down for dinner at the 66 Diner. This is not a vintage establishment, but is specifically designed to capture everything about the distinctive 1950s diner aesthetics and experience. I loved the food, styling, decor and service: 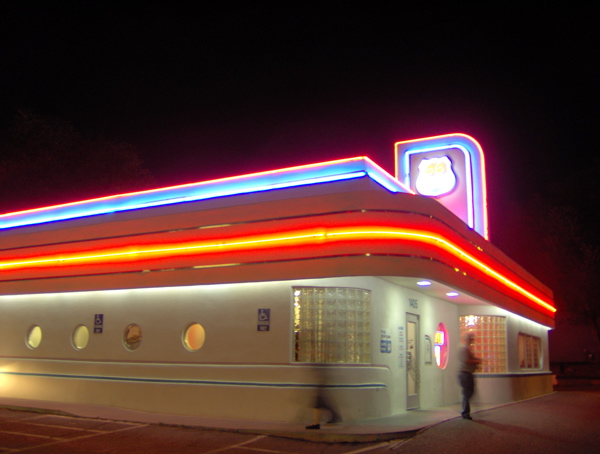 Tomorrow I must end my Route 66 journey in order to have time for Monument Valley before my flight back home on Sunday. Many interesting places lie between now and then: the Rio Grande, the Continental Divide, the Petrified Forest, Meteor Crater.