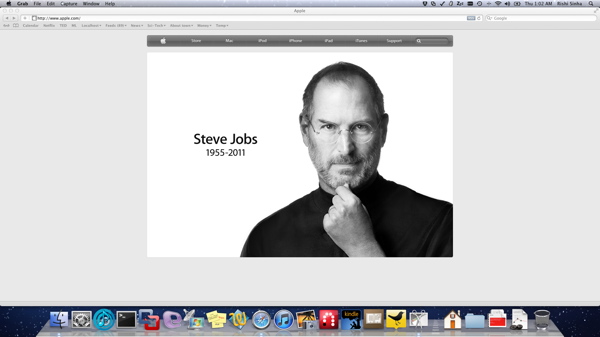 Before today, there were only two people I did not know personally whose passing had affected me emotionally — Mother Teresa and Princess Diana. Today, there is a third — Steve Jobs.

The backdrop, his life’s Homeric diorama. The song, his lust for the extraordinary. The sweetness, his precise compass for beauty. Over the years, this whole crystalline performance has held me rapt and ignited my latent ambition. Only such a devoted worshipper at the altar of Platonic perfection could have inspired an arch nihilist such as myself to material ambition. Yes, if it’s not dramatic and beautiful, it’s not worth doing. Yes, it extends the lineage of the Acheulean hand axe, and must be worthy of this honor. Yes, you must do battle with the forces of utilitarianism, and yes, it will always be 1984.

My personal drama was further heightened by my Silicon Valley location. Even though I am a faceless extra here, being here, in the birthplace of the epic personal computer revolution, has affected me palpably. I feel so privileged to be this close to the thrust of this sweeping arc.

The Steve Jobs story, the Steve Jobs message and my accidental geographical proximity to it all — all of this collapsed tight around me today, squeezing out of me a melancholy sense of loss for this determined entropy-reverser. I felt angry at the cruel illness. I felt compelled to commune and express the drama in my soul, so I put together an embarrassing tribute to Steve Jobs and sped off to the Apple Store in Palo Alto.

I got to the store a little before midnight, and found a few people taking pictures of the things other mourners had left in front of the store. I leaned mine against the wall, and spent some time shuffling around with a lump in my throat. This was not just for Steve Jobs’ passing, it was also for the privilege of being here in the Valley to touch this float in the grand parade of human endeavor, from starstuff to iPad. I think Steve knows this privilege, always did. 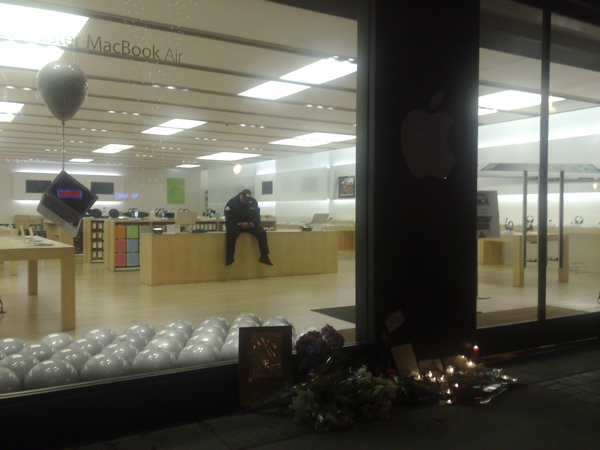