Route 66 was one of the first continuous spans of paved road running across a vast length of the US. It ran between Chicago and Los Angeles (specifically, Santa Monica). It officially came into existence in 1926, a time when the rise of automobiles was placing new demands on the transportation infrastructure of the US. With the establishment of Route 66, it became possible to drive from the shore of Lake Michigan to the shore of the Pacific Ocean without stopping or worrying about navigation. It wasn’t until 1937, however, that the last section of Route 66 was finally paved. The promoters of Route 66 used a number of schemes to popularize it, including organizing a foot race from Los Angeles to New York via Chicago. They dubbed Route 66 the Main Street of America, and indeed it ran through the centers of many small towns that thrived on the new business brought in by travelers. In the 1930s, America was in the grip of the Great Depression. To add to the misery caused by it, great famines and dust storms ravaged the livelihood of farmers in Oklahoma and nearby states. Many were uprooted from their homes and forced to migrate west on Route 66, drawn by news of plentiful employment in the orange orchards of California (news that was sadly overblown). John Steinbeck wrote his Pulitzer Prize-winning novel The Grapes of Wrath as the saga of one such group of (fictional) migrants. This book, and the John Ford-directed, Darryl F. Zanuck-produced movie version of it that soon followed, forever established Route 66 as a symbol of the pain, hope and adventure inherent in the American character. During the war years in the 1940s, Route 66 was filled with servicemen traveling between home and their stations, and trucks carrying the men and materiel of battle. In the 1930s and 1940s, Americans fully exploited this new corridor with their new means of travel. In the post-war years, it acquired its current fame, as Americans took enjoyable road trips on it to attractions such as the Painted Desert, the Grand Canyon and Disneyland.

Starting 1956, when the Federal Administration under Dwight Eisenhower laid out plans for a 42,500-mile system of roads that we now know as the interstate highway system, the demise of the official Route 66 began. Under the federal plan, narrow surface long-distance roads such as Route 66 were to give way to a modern high-speed, limited-access freeway system. Over the next 30 years, spans of Route 66 were progressively replaced by a sequence of five interstate highways: the 55, 44, 40, 15 and 10 highways. The old Route 66 lay mostly parallel to these new highways, but now eclipsed by these new high-speed, high-volume corridors. Route 66 does not officially exist any longer. However, most of the pavement still exists, and the families, homes, schools and churches that enjoyed the Route 66 spotlight also very much still exist, but outside the glare of the freeway. Thanks to the efforts of preservationists, the path of old Route 66 has been documented, and in many places signs installed to indicate that path. Today, the faithful still journey Route 66 in search of the vintage flavor of road travel.

My first day on this short Route 66 trip was full of challenges. My flight from San Jose to Chicago was oversold, and there were tense moments at the airport while I waited to find out if I would be on the flight. I finally made it, but in a middle seat. I can’t remember the last time I wasn’t in an aisle seat on a flight. At Chicago, I had to spend almost an hour dealing with two separate issues with my car rental. Once those were resolved, I headed off to Grant Park, with the intention of starting my journey at the traditional beginning of Route 66 between Grant Park and Lake Michigan, at the intersection of Jackson and Lake Shore, and also pass by the symbolic beginning of Route 66, at the intersection of W. Adams and Michigan. However, when I arrived at Grant Park, the place was swarming with humanity, cars were being herded into reluctant paths by the orange vests, and roadblocks rendered GPS almost useless. I had stumbled right into Taste of Chicago, a massive food festival that has entirely taken over the Grant Park area this week.

The true beginning of Route 66 was hard to get to by car (and impossible to start the drive on, because of the closure of Jackson between Lake Shore and Michigan), so I walked to it and took a picture. It was a slow, slow crawl through the sticky ooze of summer people: 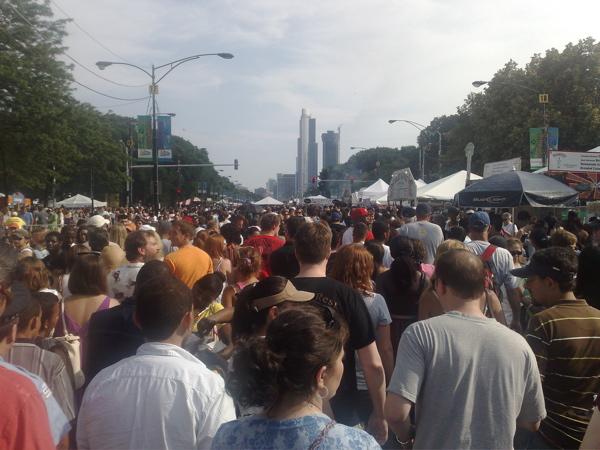 I spent what felt like ages just making it out of that mass of bodies. After a lot more time wasted on foot and in the car, navigating the obstacle course of road closures and restricted movement, I finally was able to start my Route 66 journey at its symbolic beginning:

A few minutes into my drive, I got to Lou Mitchell’s Restaurant, an establishment dating back to 1923 where it is customary for Route 66 travelers to have the first meal of their journey. Unfortunately they close at 3 pm, and I was well into my day.

I was quite grounded about the unpredictable realities of travel by now, and scaled down my ambitions for the trip. I realized I would spend an inordinate amount of time just staying on track without a navigator, so I rebalanced my freeway-Route 66 distribution to spend smaller amounts of time on Route 66 than I had initially planned. Accordingly, I took the interstate to Wilmington, a small town that Route 66 passes through, thinking I might stay there for the night. Wilmington turned out to be so small that there is no place to stay, except a very questionable motel. By the time I had decided to look for lodging elsewhere, it was dark and had started to rain. The lightning displays I witnessed on the way back north to Joliet (a larger town) were phenomenal. I had never seen such lightning discharges before. It was a hot and humid rain. On my way to Joliet, I came across the historic Launching Pad Drive-In and checked out their Gemini Giant, one of the kitschy “muffler men” that used to dot the roadside in past decades (terrible picture, I know): 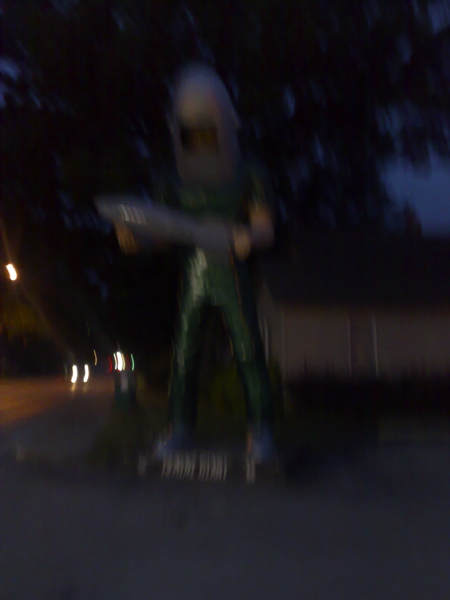 I checked into a chain hotel at Joliet, with the usual amenities. I drove a substantial number of Route 66 miles between Wilmington and Joliet. In my first day’s experience, I became very aware how much I need the comforting familiarity of the interstate and its homogenized business establishments. The interstate feels like a cocoon. The purpose of this trip is to break through that cocoon as much I safely can. I felt out of my element on my first detour from the interstate, and will pursue that experience again on the remainder of this trip. However, after my short inspection of the motel in Wilmington, I have decided to retreat to a nice hotel in a large town every night. Also, I’m pretty sure my remaining posts are going to be much shorter than this! Time to enjoy the Ramada.

2 thoughts on “Day 1 on Route 66: Chicago, Joliet and Wilmington”