I started the day fresh and well rested, and had a good experience. Thanks to the Historic Route 66 signs placed by the state of Illinois, staying on track was achievable without a navigator. I started at Joliet and drove through a number of small towns: Wilmington, Braidwood, Gardner, Dwight, Odell, Pontiac, Chenoa, Lexington, Towanda, Normal, Bloomington, Divernon, Litchfield. As I drove through these little town centers, I got a palpable sense of how different life must have been in the Route 66 heyday, and how businesses must have folded up after the interstate came along (except at Litchfield, which seems to be doing pretty well, and Bloomington, which is a big town). This is not like freeway driving at all.

I drove through Wilmington, which I knew from last night. I passed the Launching Pad Drive-In and the Gemini Giant in daylight, and took a much better picture than yesterday’s: 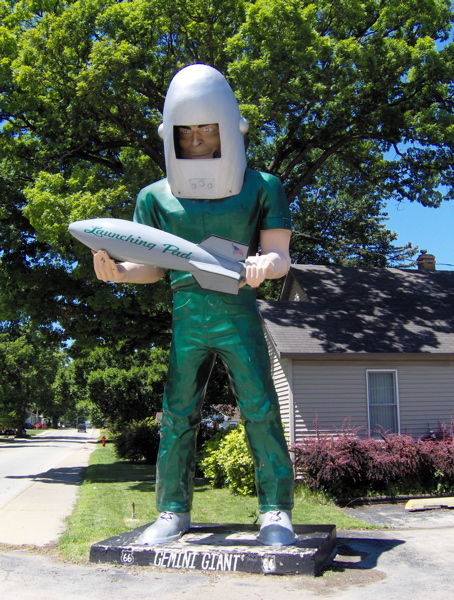 Further up the road is the since-1956 Polk-A-Dot Drive-In, where I spotted some celebrities: 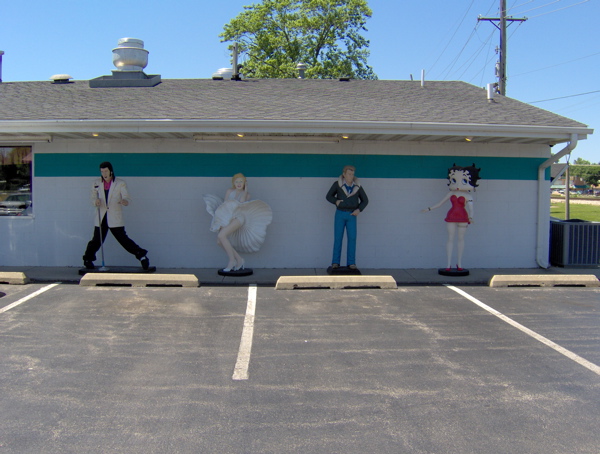 At Odell, I came across a preserved gas station dating back to 1932. It is no longer operational. This is how they filled gas back then: 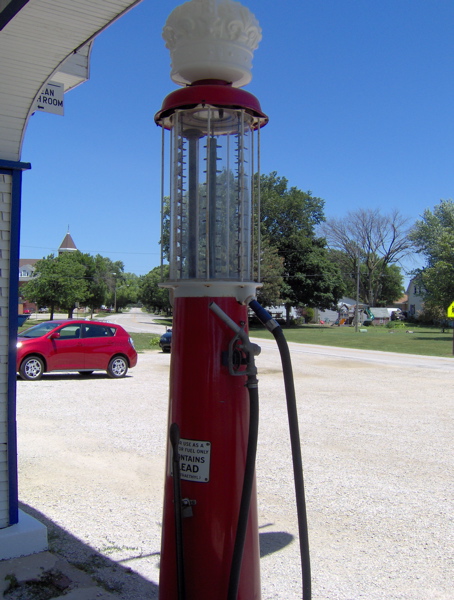 The transparent container on top has gallon markings. Fuel was measured out in it, then transferred to the car. I spoke to the storekeeper about last night’s thunderstorm, and he said he too was impressed by the light show. He said he hadn’t seen lightning like that in years, and he’s a local.

I followed Route 66 until Bloomington. The original pavement seemed to be running alongside me, cordoned off to motor vehicles. Here it is, the Mother Road itself:

In Lexington, there’s a section of the original pavement like the one above that you can stroll on.

Starting at Bloomington, Route 66 starts overlapping with the freeway quite a bit, and staying on it feels like a lot of effort. I got on the freeway and headed for the Cozy Dog Drive-In at Springfield, started by the inventor of the corn dog. I thought I could smell those hot dogs from 50 miles away, but when I got there, I discovered they are closed on Sundays. Oh well. Back on the freeway and back off at Divernon to drive on 66, with the intention of eating at the Ariston Cafe, perhaps the oldest restaurant on Route 66. Route 66 was closed south of Divernon, but I got to Litchfield and the Ariston Cafe via the freeway.

It was late afternoon, and I’d had my fill of navigating Route 66 for the (sunny) day. I made a beeline for St. Louis (the next big city on Route 66), leaving the flat prairie of Illinois behind and crossing the Mississippi River. I didn’t know if I would stop at St. Louis or press on after a quick look at the Gateway Arch. But when I did get to the Arch, I was so impressed by its engineering and significance that I checked into a nearby hotel for the night and spent the rest of the evening touring the Arch.

The Gateway Arch is a staggering 630 feet tall. It is a graceful and majestic structure, conceived by the mind of a great architect and designed and forged by skilled engineers and workers. It is in the shape of a (weighted) catenary; the narrowing of the cross-section towards the top and the angled sides lend it great beauty. 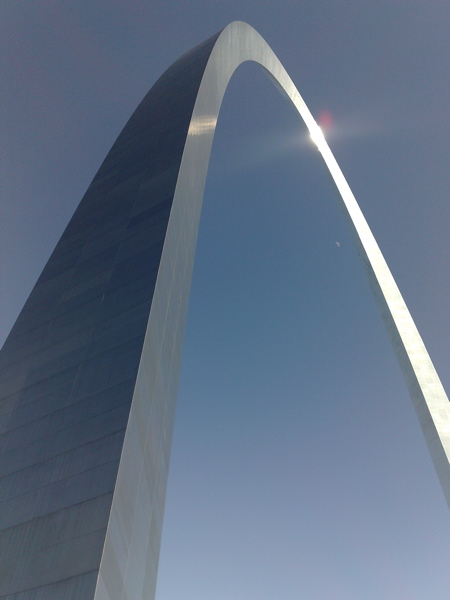 The Arch is a monument to the western expansion of the United States, and to the role that St. Louis played in that expansion. Given the history of Route 66 and the spirit of my journey, the Arch seemed to be an important and relevant symbol, and its symbolism, beauty and craftsmanship drew me to it. Everything about its exterior seemed to suggest that there was no access to its interior, far less its apex. However, I noticed a row of windows at the apex, and then a whole subterranean complex housing a museum and serving as a launchpad for a ride to the top of the arch from within. The museum is about the westward expansion of the US, and has a judicious selection of material that anyone could absorb in a typical visit: 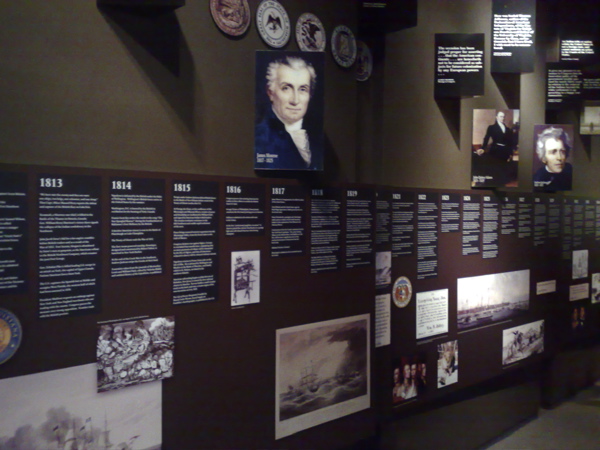 The ride to the top was intriguing. Because of the curve of the Arch, regular elevators won’t do, and special trams have been installed to carry 40 passengers at a time to the top. The tram ride is claustrophobic, but very curious in its movement. It does not move like a train or elevator, but seems to move in all kinds of directions during its journey. The design should be interesting to understand. Here’s all one might want to know about the Arch: 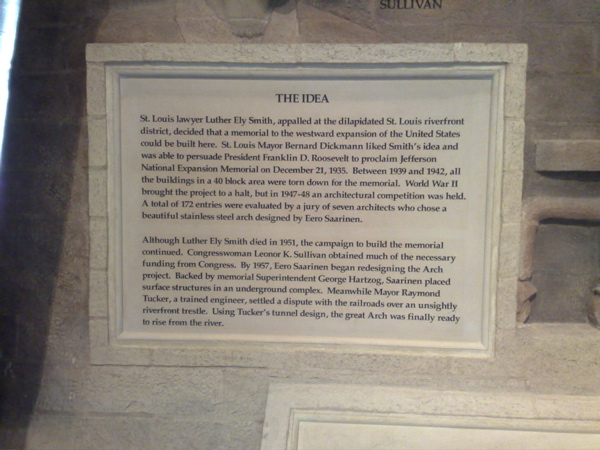 The Great American West and its colonization fascinate me, so this was a very satisfying discovery, over a few very fulfilling hours. I greatly enjoyed the displays at the museum of westward expansion, and I bought a reprint of a vintage book at the store: The Homestead Builder, Practical Hints for Handy Men, originally published for those migrating to the uncolonized West to homestead. So I rest in St. Louis tonight, before starting my westward journey tomorrow.

One thought on “Day 2 on Route 66: Out of Illinois and into Missouri”