My day started where last night had ended, at St. Louis, Missouri. I spent the day following the diagonal path of Route 66 through this state. My Route 66 map for Missouri said “Routings through St. Louis are numerous and complex, and even after a process of elimination, choices must be made.” This opening line was daunting enough that I made the choice to take the freeway out of St. Louis, considering my tight schedule. But I did make one traditional Route 66 stop in St. Louis: Ted Drewes’ Frozen Custard. This Route 66 icon has been in operation since 1941 and is still very popular, as I could tell from the crowd on a Monday morning (not visible in the picture). 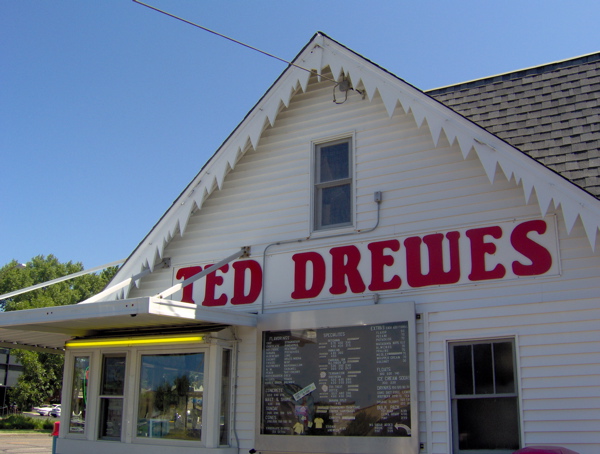 As I drove on the freeway tracking Route 66, I noticed that the north-south 55 interstate of the last two days had handed the baton to the east-west 44 in St. Louis. I also noticed that the last two days’ flat driving over the Illinois prairie had shifted to hilly ascents and descents. In the terrain map below, notice the change in terrain across the Illinois-Missouri border. This border is defined by the Mississippi River, which separates the Ozark Highlands of Missouri from the plains of Illinois.

I left the freeway at Stanton, gateway to the famous Meramec Caverns, another Route 66 staple for travelers in the 1930s. These are limestone caves that you can tour. They were aggressively marketed all over the Midwest by having the sides of barns painted with advertisements for this attraction, not just along Route 66, but other highways as well. Their clever marketer advertised the caverns as the former hideout of the outlaw Jesse James, despite the lack of strong supporting evidence. Soon, people far and wide had heard of the Meramec Caverns, and the caves became a veritable pilgrimage for (the gullible?) Route 66 travelers.

At Stanton, I got on to Route 66, and passed through numerous small towns again: Stanton, Sullivan, Bourbon, Cuba, Fanning, St. James, Doolittle, Clemetine, Hooker. Rolla was the one big town I passed through. Driving this section was like being on a gentle roller coaster ride, because the old road followed the ups and downs of the terrain, whereas the newer high-speed interstate system was built to grade out much of this variation for safer driving at high speeds. I could see this difference clearly as I compared my road with the interstate I was driving next to.

I sought out the “Devil’s Elbow” and drove on it. This is a now-bypassed section of Route 66 that is a bridge over a sharp bend in the river below. It was bypassed in the war years when transporting big military trucks through the sharp turn caused difficulties. 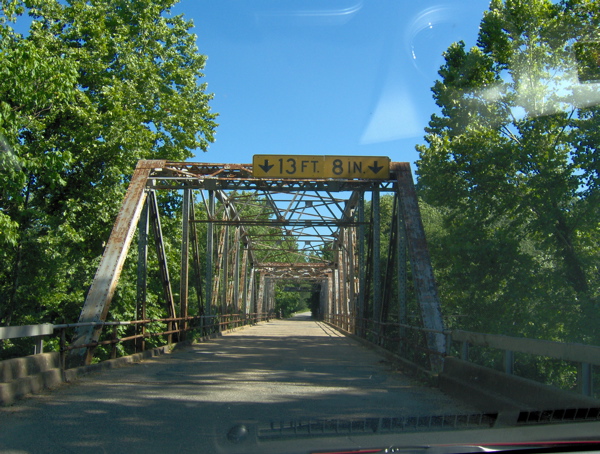 I took the freeway to Springfield, where I noticed a sign for a historical homestead site (the Nathan Boone Homestead). I took a detour to check out this potentially fascinating exhibit, but as I suspected, it was too late in the evening to visit it. It features a log cabin built in the late 1870s.

It was pretty late in the evening; the sun and elusiveness of Route 66 had worn me out. I couldn’t make it to Joplin, the last stop in Missouri, as I had planned, and took respite in the serendipitous discovery of a chain hotel while trying to sniff out Route 66 at Springfield.

Missouri hasn’t done nearly as good a job as Illinois with the road markings for Route 66, and today was rather hit-and-miss. If this keeps up, I’ll have to seek out just the easiest sections of Route 66 in each state. Tomorrow is big, because I will be driving in three states: Missouri, Kansas and Oklahoma.

2 thoughts on “Day 3 on Route 66: Cutting through Missouri, St. Louis to Springfield”