I drove most of Route 66 back in 2009, but I had to end at Flagstaff, Arizona. I vowed to return and complete the journey to Santa Monica, and this Memorial Day Weekend, I’m doing just that. Rather than fly to Flagstaff, I flew to nearby Phoenix, to avoid competing with the Grand Canyon crowds at Flagstaff, and also because the car rental at Flagstaff would be closed when I arrived Friday night.

This morning I zipped up the freeway to Flagstaff, and picked up where I had left off in 2009. Like any other Route 66 town, the downtown area is clustered close to Route 66, but unlike many other such towns, downtown is actually mostly one block away from Route 66. This is probably because one side of Route 66 is entirely occupied by the railroad. The town owes its existence to the westward  expansion of the Atlantic & Pacific (later Santa Fe) Railroad. It’s an agreeable downtown, especially compared to the character of downstream towns such as Williams and Seligman, which I shall have more to say about soon. I remember the first piece of Route 66 kitsch I saw back in 2009 was the Gemini Giant muffler man. Several muffler men wielding a variety of objects were installed on Route 66, but the very first muffler man was installed here in Flagstaff, in front of a cafe that is now called Granny’s Closet. He has since been moved, but a more recent replacement stands as a reminder: 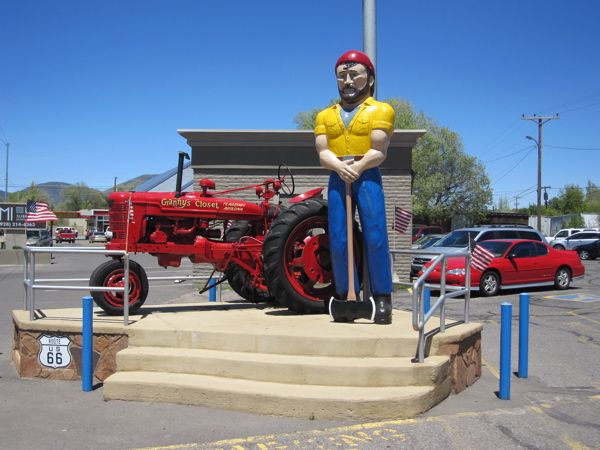 Pretty cool that this trip started with a muffler man too. I popped into Granny’s Closet for lunch, walking right into the closing moments of the UEFA Champions League final, an event I would have been completely unaware of otherwise. Barcelona defeated Manchester United, pleasing the restaurant patrons terribly.

After Flagstaff, Route 66 overlaps on and off with the interstate 40. The next big stop is Williams, the last Route 66 town to be bypassed by the interstate freeway system. Williams takes its Route 66 spirit seriously, which means the small downtown is festooned with Route 66 flags, banners, shields and signs, and the (eastbound direction of the) road lined on both sides with gift shops stuffed with Route 66 souvenirs. This is radically different from the small Route 66 towns all the way from Illinois to New Mexico, and even including Flagstaff. Beyond Williams, it seems, Route 66 nostalgia is not left to chance. I can’t say I enjoyed this intense celebration and recreation of Route 66 icons. I did like some of the neon I saw: 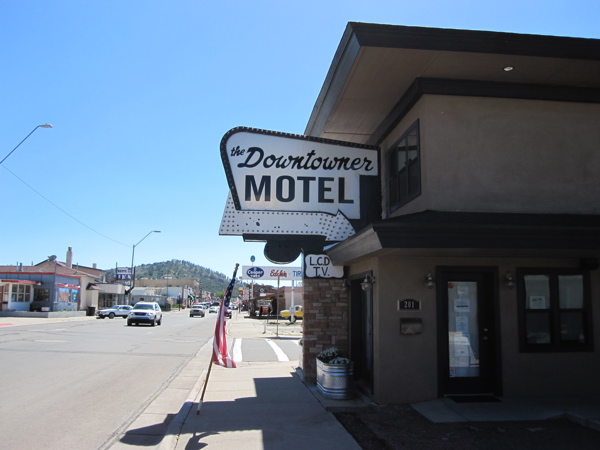 The other thing I liked in Williams is the old train station, running trains on the Grand Canyon Railway going to the South Rim. I was lucky enough to catch a vintage steam locomotive pulling a train out of the station — it turns out the Grand Canyon Railway used to run these steam engines only on special days of the year, but they had to stop them entirely in 2008. They came back after being fitted to run on vegetable oil, again running on a few days of the year, and happening to be at the station to watch this was a real stroke of luck.

I checked out a bunch of other Route 66 attractions in Williams before hitting the road again. Drove through the ghost town of Ash Fork before getting on what is the longest remaining unbroken stretch of Route 66, running about 159 miles to the Arizona-California border. This stretch departs from the freeway (as you can tell from the map above), and runs parallel to the train tracks. I had a mile-long freight train run alongside me for a while, which was fun.

Also, this stretch is maintained as a legitimate road, complete with signage and passing lanes — unusual for Route 66. There are also a lot of recreated Burma-Shave ads. Burma-Shave was a maker of shaving cream with a distinctive style of advertising on highways. One ad was actually split over four of five different signs placed sequentially along the highway, so someone driving by would read them somewhat like a flipbook. The messages are often about (not) speeding, like this one:

I stopped at Seligman, home to more Williams-like Route 66 extravaganza. The Snow Cap used to be a popular eatery here, and is still in business. They served their food with a side of gags and pranks on unsuspecting customers, a spirit betrayed by their “Sorry, we’re open” neon sign. 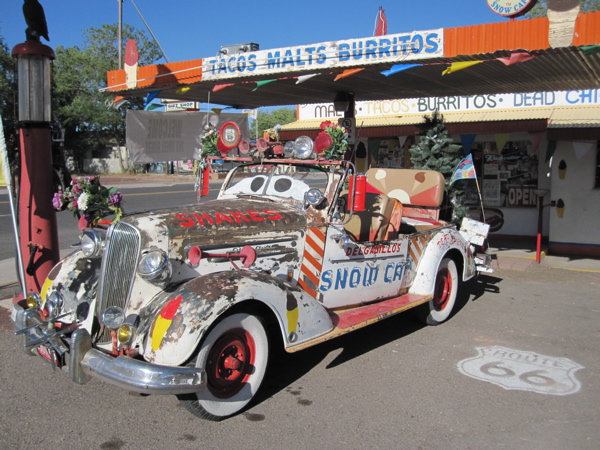 After a few more stops and easy cruising on this unbroken and well-maintained stretch of Route 66, I reached Kingman, where I will spend the night. On the way I drove through Truxton, an absolute ghost town. What makes it extremely ghostly is there actually seemed to be inhabitants stumbling around in the ruins of this bypassed highway town. 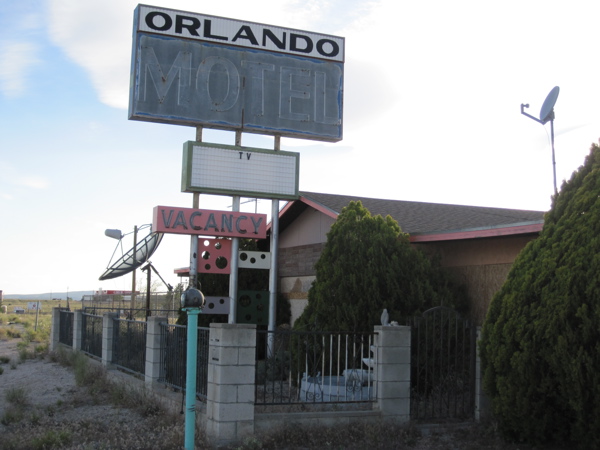 Route 66 is very packaged in this part, in great contrast with what I experienced in the earlier states in 2009. I’m not surprised — I’m getting closer to California and Disneyland, which concentrated a lot of the traffic headed westward. Or maybe I’m mistaking diehard Route 66 pride for commercialism.

Tomorrow I will cross into California. This passage was much feared in the days of the Dust Bowl migrations when weak, overloaded cars and trucks struggled to make it up the incline to Oatman, Arizona and through the Mojave Desert. At Hackberry General Store, my last stop before hitting Kingman today, cattle skulls, dilapidated vintage cars and this warning sign evoked the days when the desert was such a challenge to travelers. 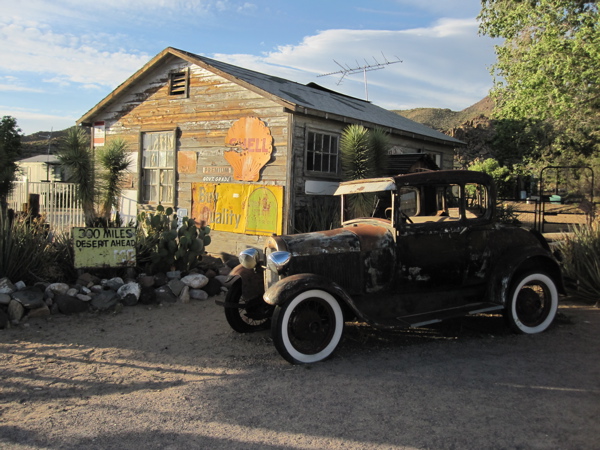